Discover all the most important sights in The Hungarian Great Plain with your local guide during an 8-10 hours countryside tour.

Let us show you the main attractions of the Puszta. That part of the country is indeed a vast prairie and in the 18th-19th century was the Wild West of Hungary where immense herds of livestock were grazed under the watchful eye of the Hungarian cowboys.

Kecskemét is a city in the middle of Hungarian Puszta Plains at 100 km from Budapest lying on the highway connecting Hungary with Serbia, Romania and the Balkans. The city is ringed with vineyards and orchards. Kecskemét is one of the oldest Hungarian settlement, the place where the composer Zoltán Kodály (inventor of the Kodály Method was born.

Description of the Tour:

Meet your local guide in the lobby of your hotel then experience a full day excursion in the Middle part of Hungary. We walk around the town of Kecskemét, during 3 hours where visit the Main Square, the Town Hall, and historical temples of the different Churches then. We continue our trip to Puszta (praire) where we will have horse cart ride and a fascinating show of the Puszta horseman show. We will finish the program local lunch (3-course menu with 1 mineral water).

We are arriving back to the hotel late afternoon. 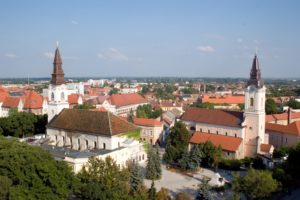 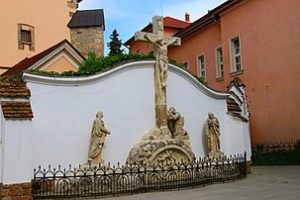 1. City of Kecskemét – the Manor to the Queen of the Puszta

After Kingdom of Hungary had been established this area became a manor to the Queen, and the cattle of the royal court were grazing herein. This land suffered significantly from invaders under the reign of the Ottoman Empire. In these perilous times, people took refuge in the neighboring swamps and marshlands, and were forced to pay taxes to various powers.

Today’s Kecskemet, the „Hírös” (famous) city, is the land of historical traditions and new opportunities, characterized by a developed infrastructure, progressive business, tourism. The city gives a lot of opportunities to large multinational companies and Kecskemét is one of the center of the automobile assembling industry. The Mercedes Benz Manufacturing Hungary plant is an important part of the global production network for compact cars. The Kecskemét plant flexibly produces three of the five models of the current compact car generation (B‑Class, CLA, and CLA Shooting Brake) on a single assembly line. Kecskemét produces the CLA and the CLA Shooting Brake exclusively for the global market. The Kecskemét plant will also produce the next generation of compact. The plant is the biggest industrial employer in the region.

The most striking part of the program is the fascinating show of the puszta ten (several horses ridden by one horseman), which is unique in the world.

We offer the following package-program:

Equestrian displays are regularly given on the farms, their most spectacular element being the horse race and the presentation of the “five-horse wagons”. *

The Puszta-Five (Puszta otos)
One of the most spectacular sights on the Hungarian Great Plains is the so-called “Puszta-Five”. A horseman drives five galloping horses, tied together in a Hungarian style, standing with one leg on the back of each of the two rear horses.
The horse attraction is also called the Koch Five or the Hungarian Post. The attraction had been dreamt up by the Austrian painter Ludwig Koch in 1923, but an outstanding Hungarian horseman called Bela Lenard brought Koch’s painting to life, driving not only five, but seven, eight, nine, and even eleven horses in his lifetime. 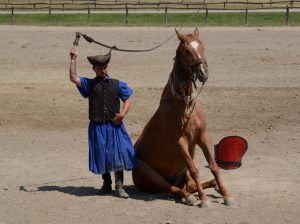 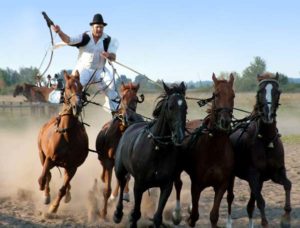